AWS Batch enables developers, scientists, and engineers to easily and efficiently run hundreds of thousands of batch computing jobs on AWS. AWS Batch dynamically provisions the optimal quantity and type of compute resources (e.g., CPU or memory optimized compute resources) based on the volume and specific resource requirements of the batch jobs submitted. AWS Batch plans, schedules, and executes your batch computing workloads across the full range of AWS compute services and features, such as AWS Fargate, Amazon EC2 and Spot Instances. There is no additional charge for AWS Batch. You only pay for the AWS resources you create to store and run your batch jobs.

Thanks to AWS Batch computing, you can execute a series of “jobs” on one or more computers without manual intervention. Input parameters are pre-defined through scripts, command-line arguments, control files, or the AWS Batch job control language. You can make a batch job to depend on the completion of preceding jobs, or on the availability of certain inputs, making the sequencing and scheduling of multiple jobs easy.

If you want to learn in detail all its capabilities, visit this web page.

In this section we will go through each individual AWS Batch architecture component, starting with the typical AWS Batch job architecture. In the diagram below you can see how: 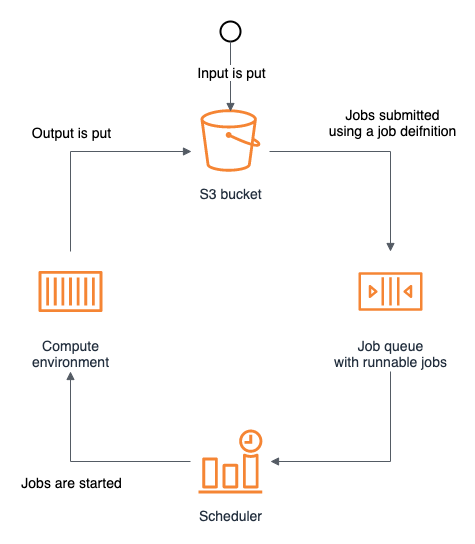 With Managed Compute environments, you can use the following instance configurations:

Jobs are submitted to a job queue where they reside until they can be scheduled to run in a compute environment. You can configure several job queues. Job queues have a priority that’s used by the scheduler to determine which jobs in which queue should be evaluated for execution first.

A Job Definition describes the job to be executed, parameters, environmental variables, compute requirements, and other information that is used to optimize the execution of a job. Job Definitions are defined in advance of submitting a job and can be shared with others.

When you should use AWS Batch

AWS Batch can be used in several scenarios where you can split a workload into smaller jobs and run those in parallel thus drastically reducing execution time. These are some example scenarios: